No.20 – Half Kill – Half Kill
This Shizuoka-based punk band produced one of the best punk albums I heard this year with this ferociously lo-fi album. The yobbish/snotty male-female vocal interplay gives a lot of songs a call-and-response dynamic, with the spindly guitar lines and occasional intrusions of synth edging many of these one-and-a-half-minute songs into postpunk territory. It all sounds like it was recorded in a bathtub, but that’s part of the charm.

No.19 – Struggle For Pride – We Struggle For All Our Pride
One of the most unusual albums of the year, We Struggle For All Our Pride ricochets between the band’s familiar blasts of heavy, noise-drenched hardcore and breezy hip-hop instrumentals courtesy of DJ Highschool and Bushmind, interspersed with vocal interludes and covers featuring (among others) Kahimi Karie, Yoshie Nakano of jazz-pop ensemble Ego-Wrappin’, and folk-punk act Ohayo Mountain Road. I have no idea what the guiding creative impulse of this album was or what the band hoped to achieve with it beyond hanging out with their eclectic array of mates, but the result is wild and deeply entertaining.

No.18 – Klan Aileen – Milk
Noise-rock is a kind of music that Japanese bands have traditionally been great at but which has rarely made much of an impact on audiences. However, one of the interesting things in recent years has been the emergence of a small knot of young bands who have managed to make noise-rock a bit more fashionable. Of this new generation of noise-rockers, Klan Aileen are probably the post popular and on their new album, Milk, they stake their position with eight dark, sparse tracks that bring together motorik rhythms and reverb-drenched guitars, charting a course between mantric psychedelia and the oblique mysteries of Chairs Missing-era Wire.Klan Aileen – Datsugoku

No.17 – Minami Deutsch – With Dim Light
In the past, Minami Deutsch have often come across as little more than a Neu! 2 tribute act, albeit a devastatingly effective one with a keen sense of structural dynamics that connects krautrock to its successors in postpunk and techno. That aspect of their music is still on display in parts of With Dim Light, but it’s a far more expansive album than that, with the band exploring dreamy psych-pop in Tangled Yarn and diverting their krautrophilia towards the likes of Ash Ra Tempel on the folk-tinged Bitter Moon. The looping rhythms and mantric repetition are still defining features of their music, and their influences are still firmly rooted in the 1970s, but now the band’s sound is far more rounded and the songwriting on display is becoming ever more sophisticated.

No.16 – Ann Murasato – Wan!
Hailing from a small town in the rural expanses between Fukuoka and Kumamoto, Ann Murasato has been active in the Kyushu underground scene since she was in her early-mid teens, having played with spazzcore trio Hakuchi, White Stripes-esque garage duo Kawaitesoro and her own chaotic avant-pop trio Tokotokotonntoko’s, among others. This debut album under her own name opens with a blast of cutesy bubblegum synthpop like a rawer, more lo-fi Chai, but this is defiantly Murasato’s sound, that she has been plugging away at here and there for years by drawing together dizzy fragments of punk, disco, retro children’s songs and pieces of the Japanese underground scene around her like collages in a teenager’s scrapbook.Ann Murasato – Go Turn!

2018 was a good year for new music releases in Japan, although as usual very little of it received much attention beyond the usual underground word-of-mouth circles. There were a handful of releases that I was anticipating intensely, like the Falsettos’ full length debut, and some nice surprises like the Doodless EP, but the story that ended up colouring this list most strongly was a number of strong releases in that loose category at the intersection of postpunk, post-hardcore, psychedelia, krautrock, industrial and experimental rock that for the sake of convenience I’m increasingly just bracketing all together as noise-rock. There were a lot of releases I enjoyed this year, though, and no doubt past visitors to this site will recognise personal favourites who keep cropping up in my year-end reviews.

In past years, I’ve posted these reviews individually, but this time round I’m doing them in batches of five. Partly this is because a fair few of these are very short as I wrote longer reviews over the course of last year, partly this is to accommodate a slightly longer than usual list, and partly it’s because a busy calendar with my own musical activities and those with Call And Response Records means I don’t want to still be posting these updates a month from now. 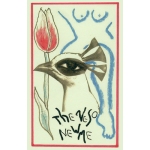 No.25 – The Neso – New Me
Tokyo-based trio The Neso finished the year out by shedding two thirds of their members, but not before finishing this top-notch new cassette EP featuring four new jittery postpunk tunes in a Delta 5/Au Pairs/Kleenex mould. The songs Fasting and Dawn also serve as powerful reminders of what an effective instrument the xylophone can be in a postpunk or new wave song (see also Electricity by OMD, Gone Daddy Gone by Violent Femmes).The Neso – Dawn (live)

No.24 – Milk – All About Milk
Tight yet raucous punk rock is Milk’s stock in trade, dashing through a dozen songs in seventeen and a half minutes characterised by shouty, fist-pumping choruses and knocked off kilter by some delightfully wonky guitar solos and unexpected mid-song rhythm changes. It’s performed with the frantic energy of hardcore, but Milk never quite cross the line into the sort of sonic claustrophobia hardcore can often produce. Instead, their guitars twang with a reassuring cheapness and and there’s a bouncy energy to the drumming. A seriously fun punk record with a touch of weirdness. 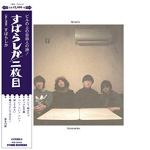 No.23 – Subarashika – Nimaime
Taking its musical cues from 1970s American folk-rock, and in particular The Band, Tokyo folk rockers Subarashika are a young, infectiously enjoyable band who revel in their retro influences and are all the better for it. There are a lot of young Japanese indie bands drawing on folk-rock influences, but they rarely explore beyond Happy End, so a band like Subarashika are a welcome expansion of the scene’s sonic palette with the deep infusion of Americana they offer.Subarashika – Kakusou to Shiteru dake! (live)

No.22 – Manon – Teenage Diary
Teenage Diary is an unexpectedly charming oddball pop album from sixteen year-old model Manon and producer Yuppa (a.k.a. HNC/Hazel Nuts Chocolate). Sonically it takes a lot of cues from the lo-fi beats, playful sampling and post-Shibuya-kei mix of scattershot rapping and whisper-voiced melody of HNC’s 2009 album Cult, albeit with a touch more electro polish, the occasional glaze of autotune and more self-conscious lyrical nods to teenage life in the Instagram age.Manon – Beat the Bad Luck

No.21 – Falsettos – Falsettos
When this album came out, towards the beginning of the year, it was a shoe-in for one of the year’s best, with its combination of slightly deranged postpunk or off-kilter new wave and baroque J-pop melodies. Read my original review here.Falsettos – Six