15. Transkam – EP2
OK, so I’m cheating a bit with this one, as it’s a late-2018 release that I didn’t get my hands on until deep into 2019, but I didn’t want to let a new Transkam fall through the cracks. On this cassette EP, progressive/post-rock trio Transkam expand on the trancelike, metronomic sound of their 2016 album Blueshade of the Omegasound, starting out more or less where they left off with the track Gnosis, before pushing away with the swirling, shoegazey Ex, and then pulling back into something far sparser, subtler and more daring with the seven-minute Mathvoid. Between these three tracks, Transkam scope out fresh territory within their familiar instrumental setup, exploring not only richer sonic textures but also making more effective use of space.

As an additional note, not listed on the track listing, but somehow downloading together with the others as a fourth track in the version I bought was also the unexpected surprise of the band’s achingly romantic cover of the icy-sweet Ai no Kobune wa Uchikudakarenai by Japan’s greatest unknown band, Mir (full disclosure, an earlier mix of this song was released on a 2015 tribute album via my own Call And Response label). I’m not sure whether this additional download is exclusive to the cassette edition of the album, but in any case, hearing the song here in the context of Transkam’s more customary sound made for a disconcerting but charming swerve to the left at the end of the EP.

14. The Neso – My World
Despite almost completely changing their lineup since 2018’s New Me EP, The Neso are still rocking the same line in Au Pairs/Delta 5-style post-punk with no loss in quality. The xylophone that they had already introduced on a couple of songs now stands alongside all the other instruments on a more or less equal footing — never really feeling completely necessary, but at the same time adding a unique element to a sound that otherwise draws from a lot of familiar elements. Most importantly, The Neso’s core elements of blank, disaffected vocals combined with surprisingly catchy hooks, choruses and harmonies are here in force, and their streak of releasing top quality EPs on an annual basis is still going strong. 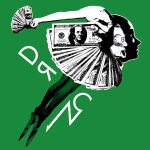 13. Deracine – Deracine
The appearance of this third album from oddball hardcore punks Deracine (or “Delasine” as some places are now spelling their name) and their first in more than ten years last autumn was a welcome surprise and they don’t seem a day older than when they last left us. Eleven micro-bursts of camp, bass-led, sampling-assisted hardcore in nineteen minutes, containing a heady mixture of anti-consumerist, anti-establishment agit-prop and wilfully dumb shitposting nonsense, this album (which confusingly has the same eponymous title as the band’s first album) is the rush of joyous, dadaist, lo-fi, anarchist party energy we all need.

12. The Omelettes – The Omelettes
Originally from Oita in Kyushu, I initially had The Omelettes down as essentially an indiepop band, and the selections of songs they’ve chosen to represent themselves with online tends to lead the curious listener to that conclusion, but on this belated self-titled and self-released debut album they reveal themselves as something stranger than that. There is a rich seam of fairly straightforward 90s alt-rock in here, but it’s offset by something more experimental and rhythmically unpredictable — a dynamic that’s at work in the two competing sections of the song Mitsubachi, one part stop-start staccato guitars, the other a fuzz-laden indie rock chorus. In a music scene where pop-orientated acts tend to be very pop and experimental acts tend to be very experimental, it’s a rare delight to see a group like The Omelettes who treat the more offbeat aspects of their arrangements exactly the same way as they treat the moments of outright pop (even if they hesitate to share the former online). It’s interesting to note the role of Hajime Yoshida of Fukuoka-based avant-rock legends Panicsmile in recording the album, and the way his own band’s work often embodies a struggle between pop and experimental elements forms an interesting parallel with what The Omelettes are doing here (albeit from a far more experimental starting point), but on this album the precise recipe of their sound remains very much their own.

11. Noiseconcrete x 3chi5 – Trick Passport
Squeaking over the line at the end of the year, Nagoya duo Noiseconcrete x 5chi5 released this fascinating remix album, in which a handful of beatmakers deliver their own takes on Nx3’s songs. This album could have been an exercise in unnecessary and untidy self-indulgence, but the results are uniformly intriguing, with 3chi5’s ghostly, witchy vocals working as a constant element around which a diverse range of rhythmical approaches — from skittering, minimal beats to industrial and EBM to drum’n’bass — work their necromancy. 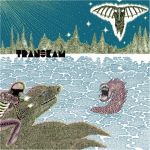 Opening with the punningly titled Trance Come, instrumental trio Transkam’s first proper release lays out the band’s intentions with pounding drums and a one-note bassline, overlaid by gradually building loops of guitar. It’s this technique of multiple layers of interacting rhythms that defines Transkam’s approach to constructing songs, and while somewhat similar groups like Nisennenmondai have been stripping their sound down to bare essentials and beyond, Transkam — despite their self-applied description as a “minimal junk three” — are increasingly maximalist in the way they pile metal riffs and wailing prog rock solos over disco and math rock beats.

Where the minimalism really is still appropriate is in the rhythm section, with drummer Yana (of Numbs) and bassist Yukiyo (from Tacobonds) never mistaking showboating for complexity. Both lay down patterns that anchor the centre of the music while guitarist Ryo Hisatsune (from Alan Smithee’s Mad Universe) embroiders the edges with loops and fragments of melodies. The results they manage to achieve with this approach range from the wilfully disruptive ⌘F to the almost-pop of the closing Fairchild, and it’s an often intoxicating experience.Transkam: Indicator (live)