As I’ve mentioned before, Kyushu has generally been good to me over the years. I’ve released albums by Hyacca (from Fukuoka) and Zibanchinka (from Kagoshima), I’ve featured the likes of Accidents in Too Large Field (Fukuoka), cynicalsmileisyourfavorite (Kumamoto), Kobayashi Dorori (Kumamoto) and macmanaman (Fukuoka) on compilation releases, I’ve included work by Nakigao Twintail (Saga) in my zine, and I’ve brought a list of bands as long as your arm from Kyushu to Tokyo to play shows. Thanks to that connection, Kyushu has been pretty welcoming to me whenever I’ve tried to do things there, but at the same time, because tours generally last three days over a weekend, I’ve tended to get stuck doing the same two or three towns and the same two or three venues. This time round, I wanted to hold onto those connections but also try to go a bit further.

The first problem with that is that most of Kyushu is what people in Tokyo call “countryside”, i.e. cities with populations of less than a million, and small town venues just don’t really command much of a crowd on weekdays. In fact many venues just don’t even open during the week. Even in Fukuoka, the undisputed regional capital, weekdays are hard going. I remember when Seiji Harajiri, the bass player of Hyacca and the manager of the Fukuoka venue Utero, was in Tokyo last year, he was looking at the schedule of a venue and marvelling at how stayed open and putting on shows every day. Most Tokyo venues manage it by charging bands between ¥20,000 and ¥50,000 to perform, which the bands promptly fail to recoup, often playing to crowds of perhaps a dozen or fewer people. Venues elsewhere in Japan generally don’t have this system, instead focussing on big weekend shows to cover the bulk of their operating costs.

So booking five days in Kyushu meant finding somewhere we could do a show on a Wednesday what wouldn’t be a disaster. Fukuoka and Kumamoto are the only cities that really have music scenes big enough to support something even remotely like the kind of leftfield, alternative-ish tour I was doing, and I was already determined that Fukuoka was going to be a weekend show. I had more friends there and a weekend gig offered a greater multiplier than a show in Kumamoto could. So I booked Wednesday the 19th for a show in Kumamoto and crossed my fingers that it wouldn’t be too depressing. 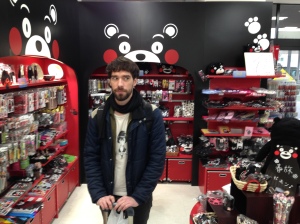 “It’s behind you!” – N’toko looks for branded goods of the nation’s favourite local city mascot

Kumamoto is a city of perhaps three quarters of a million people, making it the third biggest city in Kyushu after Fukuoka and Kitakyushu. Despite this, it has a much more lively music scene than Kitakyushu due to the effects of urban mass relative to distance. Kitakyusyhu is right next to the larger cultural centre of Fukuoka, which tends to absorb all of its alternative culture in much the same way Tokyo does to Yokohama. Kumamoto is just far enough away from Fukuoka as to be outside its gravity well, but close enough that bands from the two cities can easily play together. The result is that Kumamoto is able to support a couple of decent venues, one very good record shop, and some of the region’s finest bands.

That said, I’ve never felt at home there in the way I have in Fukuoka or Kagoshima, where I have much closer personal connections with bands. I always get the self-conscious anxiety of being perceived as an arrogant big city asshole, the sense that my musical ethos is just a bit too niche for what audiences there are prepared to put out for, and that the cool local bands deal with bigger fish than me anyway (the Kumamoto scene, largely through the excellent Doit Science, seems very close with the more respectable side of the Tokyo alternative scene, but there’s a bit of a disjunct with the slightly more maniacal Koenji subscene that I’m sort of part of). It’s an awkward mix of inferiority and superiority complexes, heightened by the fact that both are grounded in some truth. 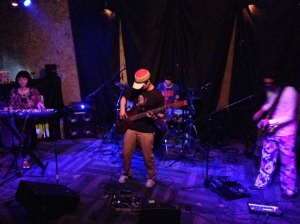 The result of that is that while Navaro in Kumamoto is quite simply the nicest venue in the whole island and one of the nicest venues in Japan, I’ve always felt a bit disconnected from the events I’ve been involved in in Kumamoto. I’ve always felt like a guest, indulged by the local establishment but not invited to play a serious part in shaping the proceedings. It’s a subtle thing, but one that has a definite (and not by any means negative) influence on the way the events are set up and go off. Basically, Navaro are an alternative-minded venue that hosts a wide range of events, have a deep knowledge of their own town’s local scene, and are the best people in town at putting together a collection of bands to get the most out of a show on a given day. Unlike in previous on-the-road shows on this tour, however, they’re not my mates: this show was about business. This was the only gig on the tour where I asked for money guaranteed in advance, and as a result, I didn’t interfere with how they arranged the event.

Of the bands, the first ones on stage were pretty good. They were called New Hawaii and seemed to be a side project of some other local bands, at least I recognised the singer from Doit Science on drums, and they reminded me of a lot of the kinds of bands you get in Tokyo playing faintly jazz-influenced, slightly progressive rock, but with a melodic, understated poppy edge at places like Shinjuku Motion. The next band seemed to be called Kanmuri Groove, although I may be misreading their kanji quite badly (冠GROOVE if anyone wants to correct me) and whatever the merits of their music, which I honestly still can’t work out, they did manage to bring a crowd, which local rapper KenVolcano did a great job of getting into the vibe and setting up for N’toko.

As I’ve mentioned before, I was wary of booking N’toko with other rappers because that’s not really the scene he fits, especially not in Japan, but he did play with a few on this tour. We always used the term “local rapper” as a bit of an ironic term on the tour to refer to the one guy in a lot of smaller towns who organisers can call on to warm up the crowd when a touring rapper is visiting but rather than letting it be a derogitary term (of course in Slovenia, N’toko himself is a “local rapper”), it’s actually one of the most interesting things about touring. The very localness is what gives the music its character and unique voice — punk has this a bit as well, but the problem with punk is that the localism often transmutes into ethnopunk, which is the worst thing in the world, while with rap, the localism more often often seems to retain a sense of contemporaneity along with its grounding in a specific environment. All rappers should be local rappers. In KenVolcano’s case, he was a party rapper, making a lot of use of samples in a way that reminded me a bit of the stuff oddball Fukuoka rapper Moth used to do back in the day (before he went acoustic disappeared from the scene). He also did a terrific job of making N’toko welcome as a touring guest playing last in front of an audience, none of whom had seen him before.

Weekday gigs in Japan are nearly always battles, especially when you’re playing away from your home crowd, and with neither Call And Response Records nor N’toko really having a reliable core of friends or fans in Kumamoto, we had to rely on the knowledge and booking nous of Navaro’s staff. They did as good a job as could be expected under the circumstances, bringing out a small but comfortable sized crowd and booking acts that on the whole complemented rather than jarred what N’toko did. At the same time, it felt afterwards like the tour was in a bit of a holding pattern. At gigs, I’m usually quite active around the room, talking to people and suchlike, but at this show, I felt like much more of an outsider, even among the two or three people who actually did know me. I was able to exchange pleasantries with the guy from Doit Science/New Hawaii, and I had a chat with one guy at the merchandise table who bought a few CDs and introduced me to his (pretty good) post-grunge/punk-metal band Syllabus. The result was that we left the gig feeling that things had gone pretty nicely but also strangely subdued. The momentum that the Nagoya and secret Koenji show had built up had been arrested slightly, but despite the rain that always seems to follow me to Kumamoto not quite dampened.