It’s always hard to tell if it’s the scene as a whole or just me as a listener, but it feels as if music in Japan is becoming ever more fragmented and compartmentalised. It goes through cycles, for sure, but the impression I get is that it’s at a particularly introverted point in one of those cycles at the moment. We see it going out to shows, where bands increasingly play in the same venues with the same kinds of lineups, and I can feel it happening to me too. Where, in the past, I would have paid some glancing attention to recent pop releases, the only J-pop album I listened to this year was Babymetal’s Metal Galaxy, which I couldn’t get through more than a minute of. In the past, it was interesting to look through similar year-end roundups by Make Believe Melodies and Beehype and see where some crossover might be, but this year neither of their lists made any impact on me; it feels like we’re all in our bubbles (although Tokyo Dross continues to listen quite widely). I’m pretty comfortable in my bubble though, and the nature of the Internet is that it’s often more useful if people know what they’re going to get. In this case, what you’re going to get is a view of 2019 from a pretty militantly underground/alternative perspective, with increasing numbers of limited-run cassette and CD-R EPs, but even within those limitations there were plenty of new Japanese releases that I enjoyed in 2019.

25. V/A – Noise Three City Story
Noise Three City Story is a compilation cassette EP featuring, as the title implies, one band each from three different cities. Tokyo act Soloist Anti Pop Totalization, whose Instant Tunes label released this, along with a couple more of this year’s most interesting releases, bookends the EP with his Daniel Miller-esque minimalist synths, while Nagoya’s Noiseconcrete x 3chi5 unleash five minutes of glorious industrial noise topped with 3chi5’s diving, twisting and swooping vocals. The third contributing act is Hernear from Sendai, an electronic project of Kamata from post-punk band Waikiki Champions, which channels DAF-style EBM through thumping techno. The whole EP is brutally lo-fi, but the raucous industrial pulse running through it gives it a fierce energy that can’t help but appeal.

24. Hazy Sour Cherry – Tour de Tokyo
On Tour de Tokyo, indiepopsters Hazy Sour Cherry deliver 25 minutes of extremely effective, bouncy Shimokitazawa-esque garage-twee that feels like bands in the 1990s imitating cassette indie acts of the 80s imitating beat music of the 1960s. Coming out from UK label Damnably, who were also behind Otoboke Beaver’s 2019 album Itekoma Hits, it’s representative of a growing trend of Japanese groups bypassing the moribund local indie market and connecting with fans via overseas labels (and presumably-re-importing whatever buzz they get and banking it with local audiences), and it’s easy to see how these sunny, energetic two-minute blasts of ramshackle guitar pop are well placed to appeal to audiences both at home and abroad.

23. Former Airline – Nu Creative Dreads
One of two excellent albums released in 2019 by sonic bedroom scientist Former Airline, Nu Creative Dreads is the artist’s take on a dub album, albeit filtered through his own particular setup, featuring banks of synthesisers and cassette loops. With its hyperactive basslines and beats against a background cacophony of psychedelic guitar and synth squiggles, this instrumental album is a disorientating listen at times, but a rich one nonetheless.

22. Demon Altar – Demon Altar
Emerging from the cinders of Tokyo post-punk/new wave stalwarts You Got a Radio, Demon Altar trade in scuzzy, distortion-drenched, gothic post-punk that leans into the darker fringes of You Got A Radio’s later work and pushes it further into Birthday Party/Jesus & Mary Chain/Joy Division territory, assisted in this general darkening of tone by the insistent drum machine beats. There’s still a sort of melancholy romance to the melodies though, the guitars swirling around the baritone vocals as they intone their cryptic or just plain indistinct mantras. It’s wilfully rough, but there’s something infectious in the combination of the beats’ relentless, driving, robot energy and the music’s insistent, melodramatic air of gothic gloom. 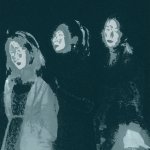 21. Tawings – Tawings
Tawings are one of the hot new things in Japanese indie right now, with a handful of singles to their name and a lot of the right people as fans (indie royalty DYGL and rising stars Luby Sparks among them), so this debut album from upper-tier indie label Space Shower puts them in a strong position going into 2020. The opening Statice will come as a bit oif a surprise to anyone familiar with their previous material’s shambling yet angular Delta 5-isms, coming in overglazed with Cranberries-does-dreampop synth-laden lushness, but the Devo-esque Poodles swiftly brings a much needed dose of nonsense to proceedings. Invisible still shamelessly rips off The Cramps’ Human Fly, but Tawings have been playing it long enough that it feels like it belongs to them by now (plus songs that end with explosions are always good). Recent single Suisen is another mainstream-ready tune drenched in washes of lush synth, and honestly it’s pretty good, but the band still sound most themselves when they’re charting a ragged, discord-scattered route through brittle post-punk melodies Like UTM, Listerine, Hamburg, and the closing Dad Cry.