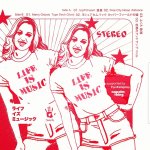 Kicking off with Fukuoka alt-rock band tepPohseen’s sprawling, ten-minute Joukei (which accounts for a third of the whole cassette’s running time), this seven-song cassette compilation of ‘90s-influenced lo-fi alternative bands from around Japan is a piece out of time with a music scene increasingly characterised by hyperactive bedroom beatmakers, slick-sounding, commercially-ambitious “city pop” and quirky so-called alt-idols. Getting past the rather generic title, Life is Music features all new recordings, but is still a collection proudly of its time. And that time is about ten years ago, with bands like Nagoya’s Sonic Youth-esque Free City Noise, Tokyo-based instrumental noise-rock band Fukuro, and the more sweetly melodic Joshua Comeback. It’s not strictly a genre collection, with Kobe/Osaka’s Merry Ghosts (the band formerly known as Trespass) calling back to the late-‘70s/early-80s postpunk era and Osaka’s Shoki no And Young (presumably an early lineup of stalwart local crazy horses …And Young) winding a coil of ’90s guitar distortion around a core of ’70s rock. At the same time, though, it’s a compilation that, despite being released in 2018 was, forged in the Japanese music scene of the early 2000s, when the band scene was defined in large part by the mainstream success of acts like Number Girl and Shiina Ringo back when she was still interesting. This compilation doesn’t offer much in the way of a path forward for Japanese underground rock, but it’s nonetheless a welcome reminder that those days were a period that produced a lot of the most interesting underground rock bands still playing today (and a lot more now sadly vanished).