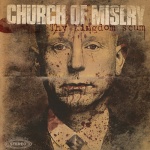 Let’s be clear about this before we start: There is no way that an album of dirty, riff-grinding, old-skool Sabbath-style heavy metal about serial killers wasn’t going to make this list somewhere, but it’s on the quality and execution of those grinding riffs that doom/stoner merchants Church of Misery come in so high. Thy Kingdom Scum is just raw, brutal, heavy like a collapsing cathedral roof in a thunderstorm. It’s also unashamedly epic, most of the songs hovering around the six-seven-minute mark with the notable exceptions of solo-shredding thirteen-minute closer Düsseldorf Monster and a relatively parsimonious, punkish cover of British 70s rockers Quatermass’ One Blind Mice, both of which underline Church of Misery’s prog credentials while simultaneously in their savage, remorseless implementation reminding us that they are here first and foremost to rock hard, harsh and heavy. Thy Kingdom Scum is sharp, intelligently constructed music, drenched in sweat, brood and who knows what other bodily secretions, that makes you feel like a god of Valhalla. It’s a beast of an album.Church of Misery: Brother Bishop (Gary Heidnik)

Japan Times albums of the year

I’ll be posting a definitive list of my personal choices in the new year, but as a taster, last week Clear And Refreshing contributor Ryotaro Aoki and I joined James Hadfield, Mike Sunda and Patrick St. Michel in The Japan Times to talk about our favourite Japanese albums of 2013.

First up, my choices will perhaps not be much of a surprise to any regular readers of this blog, with Melt Banana’s Fetch taking top place among my recommendations. I suspect that under other circumstances, Ryotaro might have made the same pick, but instead he went with heavy riffsters Church of Misery’s Thy Kingdom Scum, which given that Ryotaro and I review all albums in our Quit Your Band! zine on something called the “Sabbath Scale” is a choice I am more than happy to endorse.Church of Misery: Brother Bishop

Patrick’s beat is pop, so he went with Kyary Pamyu Pamyu’s Nanda Collection. Kyary has always been my least favourite of Yasutaka Nakata’s musical projects, and I found Nanda Collection a difficult and pretty intense listen despite not actually disliking anything on it in particular. I don’t like to shy away from challenging music though, and it’s an album rich in musical ideas that pushes them further than Kyary’s earlier releases, so it may yet make my Top 20 of the year (although probably somewhere behind the top notch 2013 releases from Perfume and Capsule). Mike’s choice of Sappire Slows’ Allegoria ensured that the JT bests represented the woozy cut & paste bedroom electronic pop that seems to be everywhere these days. She’s certainly very good at it, although whether she’s one of the best is hard to tell since there really is so much of it. I might have gone with Jesse Ruins over this, but that may be more down to my 80s synth bias and not having spent enough time with the album I can’t really say. Definitely a worthy addition to the selection though. James Hadfield, who I do the monthly Fashion Crisis party with in Koenji, went with Yosi Hosikawa’s Vapor, which I must admit not having heard but James has impeccable taste and what I have heard from the album is marvellous.Yosi Horikawa: Stars

Note: If you’re running up against The Japan Times’ new paywall by clicking all these links, just register for free (they won’t spam you) and you get access to 20 articles a month, which will likely be more than you’ll ever need from this blog.