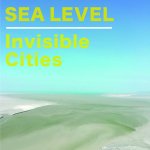 Post-rock as practiced in the Japanese alternative scene tends towards two main poles, with the fiddly math-rock of Toe on one hand and the endlessly climaxing wall of sound of Mono on the other. As the bassist in Macmanaman, Takeshi Yamamoto has plenty of form in working to split that difference, but switching to guitar with the band Sea Level, he charts a different path altogether.

Running at less than half the length of Macmanaman’s New Wave Of British BASEBALL Heavy Metal (no.13 on this list), Sea Level’s Invisible Cities nevertheless adopts a far less hurried pace. It is also an album that pays far more attention to texture, with the three-part Kubilai e Polo interspersing its ambient, wandering guitar, synths and samples at intervals throughout the album. Sea Level’s roots as an improvisational band show through in the overlapping, freeform nature of much of their sonic explorations, with the composition more apparent in how it’s all stitched together. The title and structure taking inspiration from Italo Calvino’s novel of the same name, the subdued Dorotea contrasting with Zaira’s building cacophony of overlapping sonic textures but both songs nevertheless reflecting the same metaphysical Venice of the mind viewed from a porch on a summer evening. Only the central Corpo really resembles a song in the conventional sense, although its fragile melody eventually gives way to freeform piano and the guitar’s distorted Robert Frippery — also, and perhaps tellingly, it’s the only track not named after part of Calvino’s book.

As the fourth Fukuoka band on this list so far, it’s tempting to view Sea Level as a further example of an extraordinary creative vibrancy in Japan’s southwestern extremities, and there’s some truth in that. However, the band are also evidence of the incestuous nature of much of that creativity. Yamamoto has already appeared on this list with Macmanaman, while he has also played with Sonotanotanpenz’ (no.9 on this list) Hitomi Itamura in the groups ruruxu/sinn and RIM and designed the cover art for tepPohseen’s album (no.15 on this list). Meanwhile Sea Level drummer Makoto Onuki has form as bassist in psychedelic rock band Semi and has also already made an appearance here with tepPohseen. Focusing so much on these acts populated by a tiny coterie of people certainly creates a skewed image of the city’s musical landscape, of which you are only seeing a peripheral corner here. However, combined with the fact that the city has a big enough scene to support their variegated explorations alongside a wealth of more conventional (and less interesting) pop and rock bands, that is also a big part part of why Fukuoka in 2017 remains such an interesting place for music.