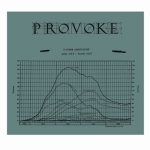 One of the most interesting developments in the younger, hipper end of the Japanese indie scene over the past year has been the way its recent trend towards dreamy “city pop” synths seems to have provoked a reaction towards louder, more discordant music at the other extreme. In Tokyo, the influence of Harajuku record store Big Love Records has undoubtedly been driving a sudden interest in noise among kids who would never normally have even known about such scenes in their usual haunts, while the popularity of bands like Burgh and Qujaku (both bands in former times known by the eerily similar names of Hysteric Picnic and The Piqnic) has succeeded in making postpunk and noise rock fashionable.

This compilation was put together by a consortium of these young, distortion-minded indie musicians, centred around the band Deviation in Tokyo and WBSBFK in Nagoya, and draws two songs each from seven bands — with the exception of Qujaku, who offer just the closing Metabolic. They and the remaining bands — Kobe-based Douglas, Tokyo’s Burgh and Klan Aileen, and Nagoya’s Sekaitekinaband — offer a scuzzy, doom-laden take on early-80s post-Joy Division rock.
One of the challenges of putting together a compilation album is how the curator balances the need to express each band’s individual sonic characteristics with the need for the album itself to project a consistent personality of its own. Provoke is clearly weighted towards consistency. Not only are nearly all the musicians young, skinny guys in black clothes (Qujaku’s bassist Hiromi is the only woman on the entire album) the bands themselves all share so many of the same influences that the album could easily be taken as the work of a single artist. That’s not top say it’s devoid of texture though. Klan Aileen’s Wire-soundalike Kunanan delivers some intense, one-note dugga-dugga-dugga for nearly eight minutes, while Sekaitekinaband’s Test is a three-minute burst of catchy bubblegum Krautrock. The grinding, minimalist basslines of Douglas contrast with the reverb-drenched psych-punk of WBSBFK and Burgh. The result is an undeniably rough-edged yet focused document of a not-quite-scene that, if the organisers have the commitment, may yet be willed into becoming one.