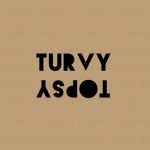 A shifting collection of Tokyo psychedelic postpunkers of no fixed membership, Buddy Girl and Mechanic followed up their luxurious self-titled 2013 debut with this claustrophobic piece of clockwork mechanical nonsense, maintaining their position as one of the most distinctive and interesting bands in the Tokyo music scene.

Can are an obvious influence, most strongly on Circe’s Kitchen, but rather than Jaki Liebezeit’s slippery drumming, the rhythms of Topsy Turvy elsewhere employ more mechanical beats, either intricate, overlapping toy rhythms as on Release the Fish, direct and propulsive as on Mechanic Nonsense, or some combination of the two as on the closing Nature/Property.Mechanic Nonsense

Seemingly stitched together from a variety of home and studio recording fragments, Topsy Turvy is a patchwork of varied sonic textures, which added to the toybox of sounds that are poured into songs like Cats Scratching makes listening to the album feel like searching for a lost earring in an unruly but fearsomely imaginative child’s bedroom. It retains a fondness for bluesy vocal melodies though, which even the most eccentric parts of the arrangements is ensures there’s a branch to cling onto, if a wilfully unsteady one.