For the tenth band in this roundup, I’m going to talk about Nakigao Twintail again. I only discovered them last year, and they’ve already split up twice by my count (soon to be three times if we’re to believe them in asserting that this next show is to be their last), but in a way all the chaos and uncertainty around their existence is a reflection of their essential appeal.

When Ryotaro and I started work on a Japanese indie zine last year, it was Nakigao Twintail’s lyric, “Yamete yaru! Konna band yamete yaru!” (from about 11:00 in the video below) that inspired us to name the zine Quit Your Band! and that trashy, anarchic negativity sounded utterly thrilling to us amid Tokyo’s pose and poise. One commenter under my initial raving exposition of their virtues dismissively referred to them as a “second rate local punk band,” but then exploring the musical value in much depth feels like missing the point with something as explosive, wilfully ephemeral and pointedly unformed.Nakigao Twintail live at Fukuoka Graf, 2013

When I first wrote about them, it was in the context of idol music, and Nakigao Twintail embody the wild, hyperreal, theatrical presence of idol music at its best but at the same time the live band format allows them to be genuinely spontaneous in a way that the rehearsed and choreographed world of idol music can only attempt to simulate: Their career isn’t tied down to a management contract, their music isn’t tied down to a backing track, and their performance isn’t tied down to a pre-rehearsed choreography. This isn’t just to make a banal point that rock music is better than pop — for a start, I seriously doubt the band members really understand the difference between the two — it’s that this particular rock band are better pop than pop: their music is disposable, their performance is a rush of raw, if often bizarrely-directed enthusiasm (check out vocalist Kanami exuberantly yelling out the name of mass murdering Tokyo underground gas attack cult leader Shoko Asahara about 12:30 in), and the whole package wraps you up in the moment and at the end spits you out, breathless. 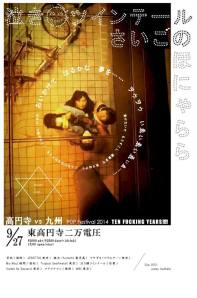 Nakigao Twintail say farewell (again) with their own version of the 9/27 anniversary event flyer (designed by guitarist Konatsu Yamaguchi). You can see the full event details on the Call And Response Records blog here.